can someone PLEASE tell my youngest to start pooping with normalcy?! my gosh. he had a blowout at the park, which I didn't realize til I was getting him in his carseat. then we left there to go to mcds for dinner and while I was waiting for my food, he blew up again! of course our mcds has no change table in the bathrooms! so back out to the van to clean him up once more.
does anyone think he may have a milk allergy? will that give you the runs a lot? I have no idea as none of us or anyone in the family has any milk allergies. I just dont know what to think as to why he's having such watery poops.

practice was fine. long, but fine. LOL! got there before 4 and coach was just a wee bit late. I took the little ones to the playground for an hour. they played in the sandboxes and everything. got nice and dirty/sweaty. LOL!
G was fascinated with the sandbox of course. other than that he liked just roaming around with me behind him, steering him where I wanted to keep him at.

tomorrow we'll be going to my moms for dinner!

Thursday is another early practice for goalie work. we'll have to leave a bit early that day so we can grab some dinner and then head to the school for Canaan's Open House. he's very excited! 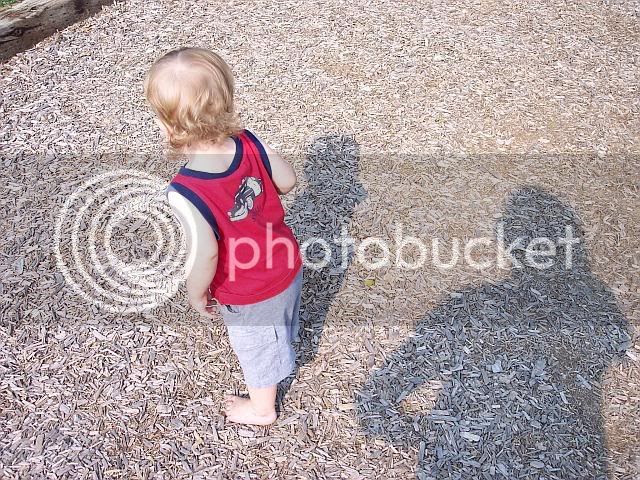 daddy made it to practice tonight which the kids loved! he enjoyed watching them since he's not really seen many soccer games. they did a scrimmage tonight against a U-10 league team. they came out tied at the end.
while dh was there, I took the 3 youngest with me to Tasha's house. she had a bag of clothes for the boys and I had 2 bags of clothes for her to go through for Landon. she took all the clothes I had and I took all she had except 2 pieces for the boys. nice jeans/shirts, even some with tags still on. G and Landon played a bit while there. of course the first thing G did was go pull Landon's hair. *blush* poor L, he's like "who is this bully?!!" :-D

then came home and started dinner (spaghetti!) and dh, C and K got home not long after.

mom's watching the kids for me tomorrow. I've got 4 shops to do. have another due in town before friday night. might just do that one ON friday while in town... or maybe thursday before practice.

I'm tired tonight. bleh! I did get to sleep in this morning! G woke at 7:30, but I pacied him and laid him back down and he slept til after 9! I woke before he did. awesome when he does that! LOL!!

dh and I have talked and we will let C enroll this year. I've gotta get it done this coming week though cause school starts on the 6th. he's excited, but nervous. it'll be very odd not having him here during the day.
Posted by Mama Gina at 11:16 PM No comments:

I forgot to mention the gross part of the day. today after driving home, G was asleep in the van, so I let him rest a bit (under the carport, in the shade with all the van doors open) he woke not long after we'd gotten all the stuff in the house. so I go to get him and realize he's blowed his britches up.  after holding him at arms length to get him inside to change (  :-D ) I go out to check the carseat and the pooh has run all down INTO the carseat frame!  so I get it out and start wrangling the cover off. how freaking hard does it have to be to get a cover off?? I got it all off except 2 elastic bands that were attached under a bracket bar underneath (where the poop was all pooled up of course) so I just snipped those off.  It seriously took me a good half hour to get that off! sheesh! then I had to spray out the seat frame and get it all dried. nasty. never had a blowout to do that bad before. yuck!

booger's in bed now. hopefully for a LONG restful night.

K's ear is still hurting. I remembered I had some ear drops that FSIL had just given me a couple weeks ago, so we're using those now and a tylenol every few hours if she needs it. she's been very grouchy today so I sent her to bed early. which of course hurt her feelings, but what are ya gonna do? *sigh*
Posted by Mama Gina at 11:22 PM No comments:

zombiefied but making it

we had a good day. G never has taken a good nap today, even with that sucktacular sleep he had. he did cat nap twice, but that's it.  he better sleep well tonight.

after dropping C off at practice I went to wmart to do the one hour photo, but thought I'd forgotten the film. searched my whole purse too. (turns out, I found it IN my purse after getting home. ) so we just wandered around wmart for a while. did find a new book I've been waiting on and picked up some .10 notebooks for the kids (they love using them to draw in)

I called the soccer coach while out too, cause yesterday I heard him talking that we were short a couple of players to be equal with the other teams. so I asked if C could signup and be on the team. he called the head guy and was happy to say its a go!! so he'll be there for practice tomorrow! he's excited, but nervous cause he's never played soccer before, but enjoyed doing it with them at practice on Tuesday.
K got to get out there and taught him some stuff today too, so that made her feel big.
so we'll go in a bit early tomorrow to get him some shin guards that fit (he was trying K's from 3 yrs ago tonight, but they're not big enough to cover those long legs LOL)
OH, funny thing while talking to the coach, he was asking about K and stuff and he asked how old she was (her league goes from 10-13) and I told him she'd just turned 10. he was VERY surprised and told me he'd been thinking she was at least 12.
I took the kids to Wendy's tonight for dinner. it was dang HOT outside. :P
Posted by Mama Gina at 11:21 PM No comments:

oy, I'm in a F O U L mood today. some certain little booger went to bed easily at 10, then woke up at 12 and guess what time he went back to sleep? go ahead, guess.
4 a.m.!! and want to know what time he woke up? 9:30! so I'm a wee bit irritable this morning. I've no tolerance for whining today.
no where to go until C's practice today.
K has an earache that started up yesterday. some tylenol helped last night (and when G quit fussing)
Posted by Mama Gina at 11:24 AM No comments:

we had a good afternoon. K's soccer practice went well and it had cooled down a bit by then with the clouds and stuff, so that made it better. I ran some errands after I dropped her off. had to get some gas, mail some letters and stuff.

C called during the last half hour of K's practice cause they were on the way home. they won tonight! 4-3!! so from the way I understand it, if one certain other team loses their last game, that team is out and C's team gets to head to state! the coach will call tomorrow to let us know.

the kids were great at practice (they do much better at the soccer fields than the ball fields for some reason). I'd bought a box of Crunch n Munch to snack on while at walmart, so we snacked on that and the other stuff I'd brought (baby didn't get any of course, he had animal crackers)

dinner was tacos/nachos! and I of course ate too much, so feel like crapola.  you'd think I'd learn one of these years!

tomorrow as far as I know: NO PRACTICES!! we can stay at home all day! and its supposed to rain a lot, so that's perfect!
Posted by Mama Gina at 11:35 PM No comments:

going to my moms soon. she's watching 3 of the kids for me today while I
take C to the ball game. I've gotta take the baby with me cause she's
got a room to move for my aunt who's going to be moving in for a while.
so at least it'll be easier with just Garrett than with all of them. K,G
and H were just as bad as little G yesterday, as in "are we done yet?"
"can we leave?" etc. so now its just the baby to take care of. it'll
still be hard cause its so hot out there and no shade unless the same
people bring that tent thingy and we can smush in a corner of it. wont
be home til around 7 (to get the kids).

in bad news, it looks like Gavin has some poison ivy again! its on his
right hand between his ring/middle finger and looks like big scratches
on his face under his right eye! he woke with it yesterday like that
(the scratches) and we thought he just scratched himself while asleep,
but now its getting little raised bumps on it. I really hate poison
ivy! ugh.

maybe playing in the pool at my moms will help to dry it up.

practice and a big 5 Birthday tomorrow!

practices went well tonight. it was super hot when C started his, but an hour later when K started the clouds had moved in and so did the breeze and it was a nice day to be out (finally!). K got kicked in the knee and jabbed in the side today, but came through fine (other than complaining about boys in general LOL! ).

C has to be at practice at 9 am. I swear this coach doesnt work on fridays. so I'm getting all my bills done tonight and my grocery list as well. I'll just take the paper in with me in the morning.

dh will be coming home tomorrow!! FINALLY!! we've missed him!!!

not sure what we'll be doing for H's bday. we may get him a spiderman cake/cupcakes or just bake some. not even sure what I'm getting him (isnt that sad??) he's liking transformers again (of course) so maybe I'll find an indestructible one to get he got a bday card from the church today and he was feeling mighty special! so while I'm not busy:

to our little rowdy rough-house Hunter Gabriel Mackenzie, who doesnt seem to know his name unless I use at least 2 when calling him! We love you so much and you never cease to keep us on our toes!